It is very fast to iterate on a job's tasks by configuring them in the pipeline.yml YAML file. You edit the pipeline.yml, run fly set-pipeline, and the entire pipeline is updated automatically.

The initial lessons introduced Tasks as standalone YAML files (which can be run via fly execute). Our pipeline.yml YAML files can be refactored to use these.

But with pipelines we now need to store the task file and task script somewhere outside of Concourse.

Concourse offers no services for storing/retrieving your data. No git repositories. No blobstores. No build numbers. Every input and output must be provided externally. Concourse calls them "Resources". Example resources are git, s3, and semver respectively.

This tutorial's source repository is a Git repo, and it contains many task files (and their task scripts). For example, the original tutorials/basic/task-hello-world/task_hello_world.yml.

To pull in the Git repository, we edit pipeline-resources/pipeline.yml and add a top-level section resources:

To deploy this change:

The output will show the delta between the two pipelines and request confirmation. Type y. If successful, it will show:

The Concourse Tutorial verbosely prefixes resource- to resource names, and job- to job names, to help you identify one versus the other whilst learning. Eventually you will know one from the other and can remove the extraneous text.

After manually triggering the job via the UI, the output will look like: 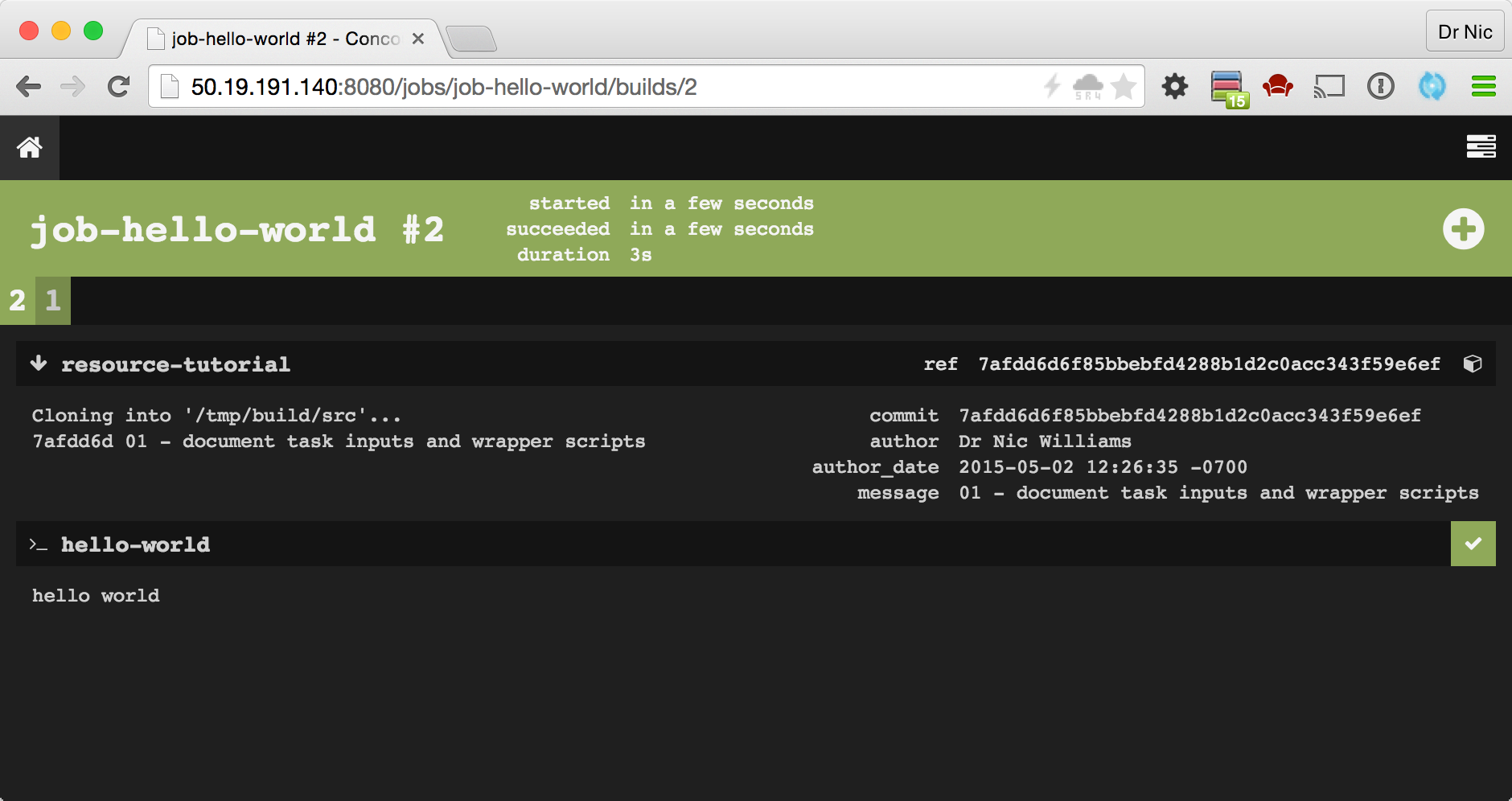 The in-progress or newly-completed job-hello-world job UI has three sections:

The latter two are "steps" in the job's build plan. A build plan is a sequence of steps to execute. These steps may fetch down or update Resources, or execute Tasks.

The first build plan step fetches down (note the down arrow to the left) a git repository for these training materials and tutorials. The pipeline named this resource resource-tutorial and clones the repo into a directory with the same name. This means that later in the build-plan, we reference files relative to this folder.

The resource resource-tutorial is then used in the build plan for the job:

Any fetched resource can now be an input to any task in the job build plan. As discussed in lessons Task Inputs and Task Scripts task inputs can be used as task scripts.

The second step runs a user-defined task. The pipeline named the task hello-world. The task itself is not described in the pipeline. Instead it is described in a file tutorials/basic/task-hello-world/task_hello_world.yml from the resource-tutorial input.

The task {task: hello-world, file: resource-tutorial/...} has access to all fetched resources (and later, to the outputs from tasks).

The name of resources, and later the name of task outputs, determines the name used to access them by other tasks (and later, by updated resources).

There is a benefit and a downside to abstracting tasks into YAML files outside of the pipeline.

One benefit is that the behavior of the task can be kept in sync with the primary input resource (for example, a software project with tasks for running tests, building binaries, etc).

One downside is that the pipeline.yml no longer explains exactly what commands will be invoked. Comprehension of pipeline behavior is potentially reduced.

But one benefit of extracting inline tasks into task files is that pipeline.yml files can get long and it can be hard to read and comprehend all the YAML. Instead, give tasks long names so that readers can understand what the purpose and expectation of the task is at a glance.

But one downside of extracting inline tasks into files is that fly set-pipeline is no longer the only step to updating a pipeline.

From now onwards, any change to your pipeline might require you to do one or both:

If a pipeline is not performing new behaviour then it might be you skipped one of the two steps above.